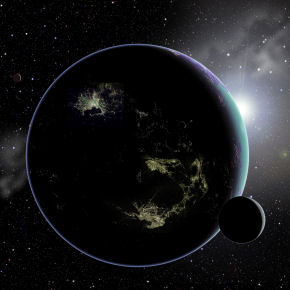 SETI's (Search for Extraterrestrial Intelligence) quest to find radio signals transmitted by extraterrestrial civilizations has so far failed to locate any alien shock jocks, so two astronomers have suggested a new technique for finding aliens: look for their city lights.

As with SETI's current search for radio signals, the new theory relies on the assumption that aliens would use Earth-like technologies, in this case artificial lighting. Loeb and Turner argue that because of technological progress, alien radio signals may only be detectable for a relatively brief period. They note that with Earth's gradual shift from radio and TV broadcasts to cable, low-power cell phones and fiber optics we have become less detectable to aliens, and following that logic, aliens might be equally hard to detect via radio.

So, how easy would it be to spot a city on a distant planet? Loeb believes the main challenge is distinguishing the light from the glare of the parent star. His and Turner's paper, submitted to the journal Astrobiology, suggests looking for the change in light from an exoplanet as it moves around its star. As the planet orbits, it goes through phases similar to those of the Moon. When it's in a dark phase, more artificial light from the night side would be visible from Earth than reflected light from the day side. So the total flux from a planet with city lighting will vary in a way that is measurably different from a planet that has no artificial lights.

The drawback? Spotting such a tiny signal would require future generations of telescopes. But, suggests the paper, the technique could be tested closer to home, using objects at the edge of our solar system. Loeb and Turner's calculations indicate that today's best telescopes ought to be able to see the light generated by a Tokyo-sized metropolis at the distance of the Kuiper Belt (the region occupied by Pluto, Eris, and thousands of smaller icy bodies).

By looking now, says Loeb, astronomers can hone the technique and be ready to apply it when the first Earth-sized worlds are found around distant stars in our galaxy. "It's very unlikely that there are alien cities on the edge of our solar system, but the principle of science is to find a method to check," Turner added.

Related:
Discuss this article in our forum
Line-Of-Sight SETI Revamp Proposed
We Come In Peace - NOT!
ETs Very Unlikely, New Calculations Suggest
Take Me To Your Lame Duck President