You are here: Home › Medicine › News › Bacterial “disabler” treatment side-steps antibiotic resistance
By Will Parker on October 31, 2011 in Medicine, News 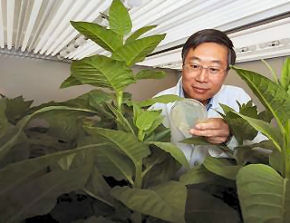 It’s not an antibiotic, but it accomplishes the same thing as an antibiotic. A compound that disables bacteria instead of killing them has proven successful in tests against antibiotic resistant bacteria and is currently being examined for commercial use in agricultural pathogen control and human medicine. Discoverer Ching-Hong Yang (pictured), an associate professor of biological sciences at the University of Wisconsin-Milwaukee, said the compound shuts off the “valve” in a pathogen’s DNA that allows it to invade and infect cells. The research is reported in the journal Antimicrobial Agents and Chemotherapy.

The compounds Yang and co-researcher Xin Chen have developed are unique because they take aim at a single component of the pathogen. “We analyzed the genomic defense pathways in plants to identify all the precursors to infection,” explains Yang. “Then we used the information to discover a group of novel small molecules that interrupt one channel in the intricate pathway system.” One of those components, the type III secretion system (T3SS), gives pathogens their ability to invade a cell, letting in a host of proteins that enhance the bacterium’s ability to cause disease.

“These bacteria are very smart,” says Yang. “They grow a narrow appendage that acts as a ‘needle,’ injecting the virulence factors, such as toxins, into the host cell. The host cell cannot recognize the pathogen’s ‘needle,’ so its defense mechanism is not triggered.”

Yang and Chen’s compounds block the production of T3SS. Although they have tested the compounds on only three pathogens, they have reason to believe the compounds will be effective against far more. “T3SS exists in many different kinds of disease-causing bacteria,” says Yang, “so the compounds can target multiple pathogens. That’s the beauty of it.”

The research is so promising that two private companies – Creative Antibiotics and Wilbur-Ellis Agribusiness – are testing it with an eye toward commercialization. “Despite the constant threat of disease in agriculture,” noted John Frieden, an R&D manager with Wilbur-Ellis, “the industry has not had access to any new antibiotics in many years. U.S. regulatory agencies do not allow agribusiness to use antibiotics that are also used for human health – even if they would be effective. The thing that caught my attention was that this was not an antibiotic, but it accomplishes the same thing as an antibiotic.”

The researchers have filed two patents on the work through the University of Wisconsin-Milwaukee Research Foundation.

1950 newspaper MEDICAL DOCTOR WARNS of BACTERIA RESISTANCE to ANTIBIOTIC USE