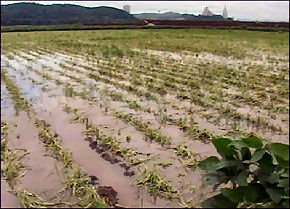 "We have identified the mechanism through which reduced oxygen levels are sensed. The mechanism controls key regulatory proteins called transcription factors that can turn other genes on and off. It is the unusual structure of these proteins that destines them for destruction under normal oxygen levels, but when oxygen levels decline, they become stable. Their stability results in changes in gene expression and metabolism that enhance survival in the low oxygen conditions brought on by flooding. When the plants return to normal oxygen levels, the proteins are again degraded, providing a feedback control mechanism," explained Nottingham University crop scientist Michael Holdsworth.

"At this time, we do not know for sure the level of conservation across plants of the turnover mechanism in response to flooding. We have quite a bit of assurance from our preliminary studies, however, that there is cross-species conservation. Our experiments on Arabidopsis show that manipulation of the pathway affects low oxygen stress tolerance. There is no reason why these results cannot be extrapolated to other plants and crops. What we plan to do next is to nail down this mechanism more clearly," said Bailey-Serres.