A ground-breaking new chemical reagent developed at the RIKEN Brain Science Institute in Japan turns biological tissues transparent (normal and transparent mouse embryos are pictured), opening the door to experiments and biological investigations that haven't been possible before.

Our understanding of biological organisms and how they function is intrinsically tied to the limits of what we can actually see. Even today's most promising techniques for visualizing biological tissue require that samples be sectioned into smaller pieces for visualization, while optical methods are prevented by the scattering property of light from probing deeper than 1mm into tissue. In both of these techniques, the full scope and detail of the biological sample is lost. 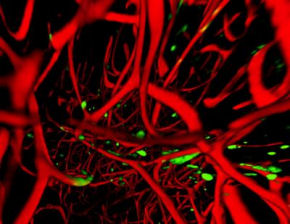 The new reagent, known as "Scale" and developed by Atsushi Miyawaki, gets around these problems by rendering biological tissue transparent. Importantly, Scale does not decrease the intensity of signals emitted by genetically-encoded fluorescent proteins in the tissue, which are used as markers to label specific cell types.

"Our current experiments are focused on the mouse brain, but applications are neither limited to mice, nor to the brain," Miyawaki explains. "We envision using Scale on other organs such as the heart, muscles and kidneys, and on tissues from primate and human biopsy samples." He adds that the ultimate goal is to create a milder transparency reagent which would allow the study of live tissue in situ.