Gettin' drunk and fallin' down; who cares? 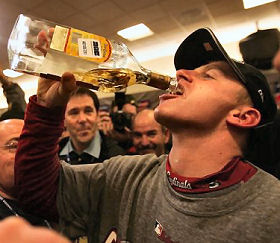 In a fascinating new study, University of Missouri researchers have shown that contrary to previous research, alcohol doesn't reduce your awareness of mistakes - it reduces how much you care about making those mistakes.

The findings showed that the brain's "alarm signal" in response to errors was much less pronounced in those who had consumed alcohol, and the response was largest for those in the placebo group. However, those drinking alcohol were no less likely to realize when they had made a mistake than participants in the other groups, indicating that alcohol's reduction of the brain's alarm signal did not occur simply because those in the alcohol group were unaware of their errors. The findings also showed that those who had consumed alcohol were less likely to slow down and be more careful in the task following errors.

"In tasks like the one we used, although we encourage people to try to respond as quickly as possible, it is very common for people to respond more slowly following an error, as a way of trying to regain self-control. That's what we saw in our placebo group. The alcohol group participants didn't do this," Bartholow explained.

Generally speaking, having a strong brain response to mistakes promotes better self-control and helps people avoid making further mistakes in the future. But there are certain circumstances under which reducing the brain's alarm signal could be seen as a good thing. "Some people, like those with anxiety disorders, are hyper-sensitive to things going wrong. In some people, a small amount of alcohol can take the edge off those anxious feelings, but consistently drinking as a way to reduce anxiety can lead to serious problems," said Bartholow.

The findings, Bartholow believes, are an important step forward in understanding how alcohol's effects on the brain contribute to the kinds of mistakes and social blunders people make when they're drunk.