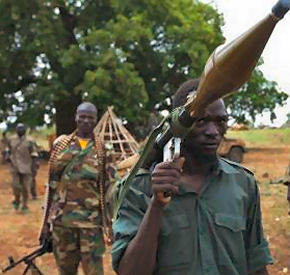 Researchers from Columbia University’s Earth Institute say that El Niño, the periodic climate cycle that boosts temperatures and cuts rainfall, doubles the risk of civil wars across 90 affected tropical countries, and may account for a fifth of worldwide conflicts during the past half-century. The paper, the first to link a natural global climate cycle to periodic increases in warfare, appears in the journalNature.

“The most important thing is that this looks at modern times, and it’s done on a global scale,” said Solomon M. Hsiang, the study’s lead author. “We can speculate that a long-ago Egyptian dynasty was overthrown during a drought. That’s a specific time and place, that may be very different from today, so people might say, ‘OK, we’re immune to that now.’ This study shows a systematic pattern of global climate affecting conflict, and shows it right now.”

The authors do not know exactly why climate feeds conflict. “But if you have social inequality, people are poor, and there are underlying tensions, it seems possible that climate can deliver the knockout punch,” speculated Hsiang.

Bad weather does appear to tip poorer countries into chaos more easily; rich Australia, for instance, is controlled by ENSO, but has never seen a civil war. On the other side, Hsiang said at least two countries “jump out of the data.” In 1982, a powerful El Niño struck impoverished highland Peru, destroying crops; that year, simmering guerrilla attacks by the revolutionary Shining Path movement turned into a full-scale 20-year civil war that still sputters today. Separately, forces in southern Sudan were already facing off with the domineering north, when intense warfare broke out in the El Niño year of 1963. The insurrection abated, but flared again in 1976, another El Niño year. Hsiang said some other countries where festering conflicts have tended to blow up during El Niños include El Salvador, the Philippines and Uganda (1972); Angola, Haiti and Myanmar (1991); and Congo, Eritrea, Indonesia and Rwanda (1997).

The idea that environment fuels violence has gained currency in the past decade, with popular books by authors like Jared Diamond. Academic studies have drawn links between droughts and social collapses, including the end of the Persian Gulf’s Akkadian empire (the world’s first superpower), 6,000 years ago; the AD 800-900 fall of Mexico’s Maya civilization; centuries-long cycles of warfare within Chinese dynasties; and recent insurgencies in sub-Saharan Africa.