You are here: Home › Animal Kingdom › News › Rats that ♥ cats: parasite rewires sexual attraction
By Will Parker on August 18, 2011 in Animal Kingdom, News 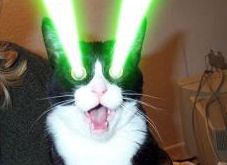 Stanford University scientists have discovered that the complex and intriguing reproductive strategy exhibited by the single-celled parasite Toxoplasma gondii relies on altering the rodent brain to interpret cat odors as sexually attractive. The new findings fill a gap in existing knowledge about a most peculiar parasite that one scientist believes could also be subtly rewiring human behavior.

It has long been known that Toxoplasma requires the cat digestive system to reproduce. Infected rodents, with a reduced fear response to cat odors, are more susceptible to predation by cats, thereby enabling completion of the parasite lifecycle.

Previous research showed that Toxoplasma invades the brain of the host and settles near the amygdala, a region involved in a wide range of fear and emotional behaviors. This study extends these findings by showing that not only is Toxoplasma found in the amygdala of infected male rat hosts, but it also changes the way certain subregions of the amygdala respond to cat odor – specifically, by increasing neural activity in regions normally activated by exposure to a female rat.

Around one-third of humans test positive for Toxoplasma, due largely to the consumption of undercooked meat or contact with cat litter. In humans, Toxoplasma exposure is most dangerous to developing fetuses and pregnant women. Recent studies have linked Toxoplasma exposure to schizophrenia, a disease noted for amygdala dysfunction and improper emotional response. Additionally, there is evidence from Europe that the parasite may be skewing gender balance.

Related:
Anchovies A Tasty Entrée Into The Marine World For Toxoplasma Gondii
Interesting video about the parasite