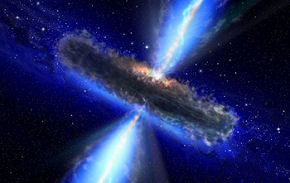 A reservoir of water that is 100,000 times the mass of the sun has been detected by an international team of astronomers in a vapor cloud surrounding a quasar 12 billion light years distant. As well as the huge quantity of water, the quasar - named APM 08279 5255 - also emits formidable amounts of energy.

The quasar's energy output - equal to that of 1,000 trillion suns - is generated by matter spiraling into a supermassive black hole at the center of the quasar. At a distance of 12 billion light years from Earth, the new observations reveal the object at a time when the universe was very young - perhaps only 1.6 billion years old.

The water vapor measured in the quasar represents the largest mass of water ever found, according to the astronomers. In an astronomical context, water is a trace gas, but it indicates gas that is unusually warm and dense. "The water measurement shows that the gas is under the influence of the growing black hole, bathed in both infrared and X-ray radiation," said study leader Matt Bradford of Caltech.

"These findings are very exciting," added co-discoverer Jason Glenn, from the University of Colorado. "We not only detected water in the farthest reaches of the universe, but enough to fill Earth's oceans more than 100 trillion times."

The discovery was made with a spectrograph called Z-Spec operating in the millimeter wavelengths (between infrared and microwave) at the Caltech Submillimeter Observatory, a 10-meter telescope near the summit of Mauna Kea, on the big island of Hawaii. Z-Spec's detectors are cooled to within 0.06 degrees Celsius of absolute zero in order to obtain the exquisite sensitivity required for these measurements.