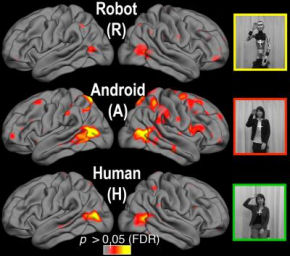 Ever watched a kids' movie where the animated human characters are realistic but just not quite right and maybe a bit creepy? Then you've probably been a visitor to what's called the "uncanny valley." The uncanny valley effect was poorly understood, but new MRI brain scans help explain why we feel repulsed when confronted with fake humans that appear too human.

People respond positively to characters that share some characteristics with humans - dolls, cartoon animals, or robots like R2D2. As the agent becomes more human-like, it becomes more likeable. But at some point that upward trajectory stops and instead the agent is perceived as strange and disconcerting. Many viewers, for example, find the characters in the animated film Polar Express to be off-putting. And most modern androids are also thought to fall into the uncanny valley.

Saygin and her colleagues set out to discover if what they call the "action perception system" in the human brain is tuned more to human appearance or human motion, with the general goal of identifying the functional properties of brain systems that allow us to understand others' body movements and actions.

The biggest difference in brain response was found to be during the android condition - in the parietal cortex, on both sides of the brain, specifically in the areas that connect the part of the brain's visual cortex that processes bodily movements with the section of the motor cortex thought to contain mirror neurons (neurons also known as "monkey-see, monkey-do neurons" or "empathy neurons").

The researchers say they saw, in essence, evidence of a mismatch. The brain lit up when the human-like appearance of the android and its robotic motion "didn't compute."

"The brain doesn't seem tuned to care about either biological appearance or biological motion per se," said Saygin. "What it seems to be doing is looking for its expectations to be met - for appearance and motion to be congruent."

"As human-like artificial agents become more commonplace, perhaps our perceptual systems will be re-tuned to accommodate these new social partners," Saygin concluded. "Or perhaps, we will decide it is not a good idea to make them so closely in our image after all."

Related:
Uncanny valley response observed in monkeys
Have You Hugged Your Robot Today?
Robots taught to deceive
Novel Robot Will Be "Dynamic And Graceful," Says Prof