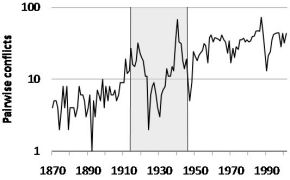 "The number of conflicts has been rising on a stable trend. Because of two world wars, the pattern is obviously disturbed between 1914 and 1945 but remarkably, after 1945 the frequency of wars resumed its upward course on pretty much the same path as before 1913," said Professor Mark Harrison, of the University of Warwick.

The number of countries - from 47 in 1870 to 187 in 2001 - is one of the key drivers, argues Harrison. "More pairs of countries have clashed because there have been more pairs. This is not reassuring: it shows that there is a close connection between wars and the creation of states and new borders."

Harrison's research defines a conflict as everything from full-scale shooting wars and uses of military force to displays of force such as sending warships and closing borders. This, he says, measures the readiness of governments to settle disputes by force. Only wars between states (not civil wars) were included in the analysis.

But Harrison believes that political scientists have focused too much on preferences for war (the demand side) and not enough on capabilities (the supply side). "Capabilities may be the missing factor in the story of the rising frequency of wars. We argue that the same factors that should have depressed the incentives for rulers to choose conflict are also increasing the capacity for war," he suggests.

The research offers three explanations for this. Firstly, economic growth has made destructive power cheaper, not just absolutely cheaper but cheaper relative to civilian goods. Second, the key to modern states' acquisition of destructive power was the ability to tax and borrow more than ever before, and the growth of fiscal capacity was hugely assisted by the rise of democracy. Third, war is disruptive of trade, but those countries that succeeded in maintaining external trading links in wartime could wage war more effectively.

"The very things that should make politicians less likely to want war - productivity growth, democracy, and trading opportunities - have also made war cheaper. We have more wars, not because we want them, but because we can," Harrison concluded.

Related:
Academics question surge's success in Baghdad
Military Superiority Sometimes A Hindrance To Winning A War
Biodiverse regions are hotspots for war
Study suggests the war on drugs might really be a war on sex