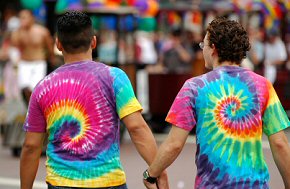 Women can more accurately identify a man's sexual orientation when they are closest to their time of peak ovulation, say researchers at the University of Toronto and Tufts University. Their new study, appearing in Psychological Science, also claims that having romantic thoughts also heightens a woman's ability to discriminate between straight and gay men.

Enhanced female gaydar doesn't seem to work when assessing women, however. "This effect is not apparent when a woman is judging another female's orientation," says study author Nicholas Rule, of the University of Toronto. "This suggests that fertility influences a heterosexual woman's attention to potential mates rather than merely increasing sensitivity to sexual orientation or nonverbal cues more generally."

The study consisted of three experiments. In the first, 40 women judged the sexual orientation of 80 images of men's faces. Forty of the photos were of self-identified gay males while the other 40 were of straight men. In addition, the women reported the length of time since their last menstrual cycle and its average duration. None of the women were using any systemic contraceptives. The researchers found that the nearer women were to peak ovulation, the more accurate they were at judging each male's sexual orientation.

The second experiment was similar and involved viewing female faces, half of whom were self-identified lesbians while the other half were straight. A correlation between fertility and accurate judgments of the women's sexual orientation was not apparent.

"Together, these findings suggest that women's accuracy may vary across the fertility cycle because men's sexual orientation is relevant to conception and thus of greater importance as women are nearer to ovulation."

A third experiment involved priming half the female participants with a story about a romantic encounter before performing the same tasks as in the two previous experiments. Rule found that the women who read the romantic story were significantly more accurate in their judgments, implying that inducing romantic or mating-related thoughts improved accuracy in identifying men's sexual orientations.