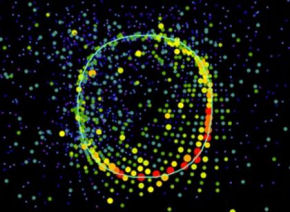 By shooting a beam of neutrinos through a small slice of the Earth under Japan, physicists say they've caught the particles changing their stripes in intriguing new ways.

The experiment - known as T2K - uses the Japan Proton Accelerator Research Complex (J-PARC), located on the east coast, to shoot a beam of muon neutrinos 185 miles underground toward the Super-Kamiokande, or Super-K, detector in Kamioka, near Japan's west coast. The goal of the experiment is to observe the particles changing "flavors" from muon neutrinos to electron neutrinos on their journey.

"We could see as many electron neutrino candidates as we saw by chance, something, like one out of every 150 times," Walter said. "This is why the title of our paper includes the word 'indications' as opposed to observation or measurement."

But if the "indications" become "measurements," the T2K results will be the first to measure a muon-electron neutrino change. Scientists want this measurement to study a fundamental parameter of physics called theta-13, which controls the muon-electron neutrino switch. Walter said there is more than one way to measure theta-13 and that several experiments are currently competing to be the first.

"It's good news that we have evidence of a relatively large theta-13, since there are even more interesting measurements that can be done if it is big enough," he said.

If theta-13 is large, it will allow scientists to measure the difference between oscillations of neutrinos and oscillation of anti-neutrinos. Walter explained that just after the Big Bang, "something caused there to be slightly more matter than anti-matter. When the matter and anti-matter annihilated each other, only that little bit of matter was left over. That matter is everything we see around us today. But no one understands how this happened. The difference between neutrino and anti-neutrino properties that we might measure in future experiments might give us clues to how the excess matter was generated."