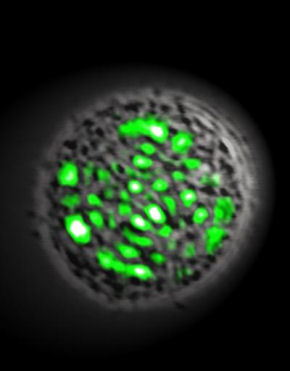 "Part of the motivation of this project was basic scientific curiosity. In addition to realizing that biological substances had not played a major role in lasers, we wondered whether there was a fundamental reason why laser light, as far as we know, does not occur in nature or if we could find a way to achieve lasing in biological substances or living organisms," explained researcher Malte Gather. Green fluorescent protein (GFP) - originally found in a species of jellyfish - can be induced to emit light without the application of additional enzymes. Its properties are well understood, and there are established techniques to genetically program many organisms to express GFP.

To assess the protein's potential for generating laser light, the researcher assembled a device consisting of an inch-long cylinder, with mirrors at each end, filled with a solution of GFP in water. After first confirming that the GFP solution could amplify input energy into brief pulses of laser light, the researchers estimated the concentration of GFP needed to produce the laser effect.

"While the individual laser pulses last for only a few nanoseconds, they are bright enough to be readily detected and appear to carry very useful information that may give us new ways to analyze the properties of large numbers of cells almost instantaneously," said co-researcher Seok Hyun Yun. "And the ability to generate laser light from a biocompatible source placed inside a patient could be useful for photodynamic therapies, in which drugs are activated by the application of light, or novel forms of imaging."