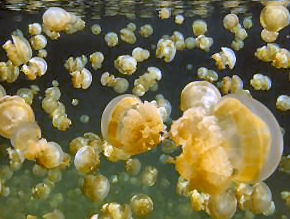 The study sampled jellyfish blooms in the York River, a tributary of lower Chesapeake Bay, and then tracked the flow of food energy (carbon) taken up and released by jellyfish and bacteria within closed containers in a laboratory. Carbon is the "currency" of food energy exchange in living systems.

"Jellyfish are voracious predators," explained Condon. "They impact food webs by capturing plankton that would otherwise be eaten by fish and converting that food energy into gelatinous biomass. This restricts the transfer of energy up the food chain, because jellyfish are not readily consumed by other predators."

Jellyfish also shunt food energy away from fish and shellfish that humans like to eat through their affects on the bacterial community. "Marine bacteria typically play a key role in recycling carbon, nitrogen, phosphorus, and other by-products of organic decay back into the food web," says Condon. "But in our study, we found that when bacteria consumed dissolved organic matter from jellyfish they shunted it toward respiration rather than growth."

The upshot of this "carbon shunt" is that bacteria in jelly-laden waters end up converting carbon back to carbon dioxide, rather than using it to grow larger or reproduce. This means the carbon is lost as a direct source of organic energy for transfer up the food web.

The researchers speculate that the shift toward bacterial respiration happens because jellyfish produce organic matter that is very rich in carbon. They do so through excretion and the sloughing of mucus. "The mucus is the slime you feel when you pick up a jelly," said co-researcher Deborah Steinberg.

The jellyfish in the experiments released large quantities of carbon-rich organic matter - with 25-30 times more carbon than nitrogen. That compares to a ratio of 6 parts carbon to 1 part nitrogen for the organic matter normally found in marine waters.

"The bacteria metabolized this carbon-rich material two to six times faster than they did with dissolved organic matter from water without jellyfish," says Condon. "This rapid metabolism shunted carbon toward respiration rather than production, reducing their potential to assimilate this material by 10-15 percent."

Significantly, the researchers also found that an influx of dissolved organic matter from jellyfish blooms changes the make-up of the local microbial community. "Dissolved organic matter from jellyfish favored the rapid growth and dominance of specific bacterial groups that were otherwise rare in the York River," says Condon. "This implies that [there are] major shifts in microbial structure and function associated with jellyfish blooms, and a large detour of energy toward bacteria and away from higher trophic levels."

Condon says it's likely that continuing climate change, over-harvesting of fish, fertilizer runoff, and habitat modifications will help to fuel jellyfish blooms in the future. "Indeed," he says, "we've seen this already in Chesapeake Bay. If these swarms continue to emerge, we could see a substantial biogeochemical impact on our ecosystems."