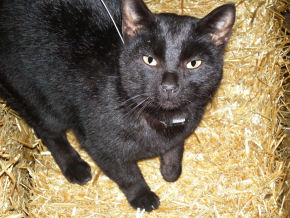 Cats are secretive creatures and their nocturnal adventures are largely a mystery, but a new study by researchers at the University of Illinois shows that even domestic cats roam over surprisingly large areas.

The two-year study used radio telemetry and an activity-tracking device to capture the habits of dozens of owned and un-owned cats living at the southern edge of Champaign and Urbana, neighboring cities in Central Illinois. Some of the radio transmitters used in the study had tilt and vibration sensors that allowed the researchers to track the animals’ every move.

Researcher Jeff Horn reported that, as expected, in most cases the un-owned cats had larger territories than the pet cats and were more active throughout the year. But the size of some of the feral cats’ home ranges surprised even the researchers. One of the feral cats, a mixed breed male, had a home range of 1,351 acres, the largest range of those tracked.

The owned cats had significantly smaller territories and tended to stay close to home. The mean home range for pet cats in the study was less than 4.9 acres. “Still, some of the cat owners were very surprised to learn that their cats were going that far,” Horn said. “That’s a lot of backyards.”

The cats also differed in the types of territories they used throughout the year. Pet cats randomly wandered in different habitats, but un-owned cats had seasonal habits. In winter, feral cats stayed closer to urban areas than expected.

Study co-author Nohra Mateus-Pinilla confirmed that most of the cats in the study stayed within about 300 meters of human structures. “Even feral cats were always within range of a building,” she said. “That shows that even though they’re feral, they still have a level of dependency on us.”

The researchers also report that even though pet cats have relatively small ranges and are active only in short bursts, their impact on wildlife in the immediate vicinity of their homes is likely much more intense than that of a feral cat that wanders over a larger territory. Domestic cats are disrupting the ecosystem by hunting, competing with native predators or spreading disease, the study contends, leading the researchers to conclude that they have a disproportionately damaging effect on wildlife – either through predation or disease (such as Toxoplasma gondii).

Virginia on My Mind The Best in Words intro by Guy Friddell (1995, Hardcover)