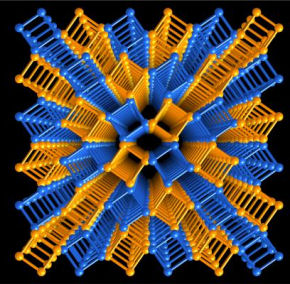 Before the discovery, detailed in the journal Nature Materials, scientists and engineers had five types of symmetries to use as tools for understanding the structures of materials whose building blocks are arranged in fairly regular patterns. Four types of symmetries had been known for thousands of years - rotation, inversion, rotation inversion, and translation. A fifth type - called time reversal - was discovered about 60 years ago.

Now, Penn State's Venkatraman Gopalan and Daniel B. Litvin have added a sixth type, dubbed "rotation reversal." The new discovery means the number of known ways in which the components of crystalline materials can be combined in symmetrical ways has multiplied from a maximum of 1,651 to more than 17,800. "We mathematically combined the new rotation-reversal symmetry with the previous five symmetries and now we know that symmetrical groups can form in crystalline materials in a much larger number of ways," said Litvin, co-author of the study.

The simplest type of symmetry - rotation symmetry - is obvious, explains Litvin. When a square shape is rotated around its center point: the square shows its symmetrical character by looking exactly the same at four points during the rotation: at 90 degrees, 180 degrees, 270 degrees, and 360 degrees. And the new rotation-reversal symmetry is obvious, as well, if you know where to look, according to the researchers.

Further work with this rotation-reversal concept revealed many more structural symmetries than previously had been recognized in materials containing various types of directionally oriented structures. Many important biological molecules, for example, are said to be either "right handed" or "left handed," including DNA, sugars, and proteins.

"We found that rotation-reversal symmetry also exists in paired structures where the partner components lean toward each other, then away from each other in paired patterns symmetrically throughout a material," Gopalan said. These "tilting octahedral" structures are common in a wide variety of crystalline materials, where all the component structures are tightly interconnected by networks of shared atoms.

The now-much-larger number of possible symmetry groups is expected to be useful in identifying materials with unusual combinations of properties. "For example, the goal in developing a ferroelectric ferromagnet is to have a material in which the electrical dipoles and the magnetic moments coexist and are coupled in the same material - that is, a material that allows electrical control of magnetism - which would be very useful to have in computers," Gopalan said.

The researchers plan to conduct laboratory experiments that make use of their theoretical work on rotation-reversal symmetry. "We have done some predictions, we will test those predictions experimentally," Litvin said. "We are in the very early stages of implementing the results we have described in our new theory paper." Gopalan added, for example, that he has predicted new forms for optical properties in the commonplace quartz crystals that are used widely in watches and electronic equipment.