You are here: Home › Health › Genetics › News › Potent anti-aging mechanism identified
By Will Parker on March 21, 2011 in Genetics, News 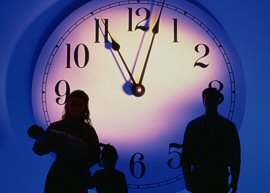 How well the integrity of our DNA is maintained is a critical factor in determining how our bodies age. Now, University of Rochester scientists say they have identified an “elite” repair mechanism that is rarely used but can greatly enhance the body’s natural preservation of genetic information. Writing in the Journal of Biological Chemistry, the researchers say the new findings may help delay the onset of aging and aging-related diseases by curbing the loss or damage of our genetic makeup, which makes us more susceptible to cancers and neurodegenerative diseases. “There is great potential here, with the capacity to change the human experience,” they claim.

The new discovery hinges on the process of acetylation, which determines the degree of fidelity of both DNA replication and repair. Past research established that as humans evolved, two routes for DNA replication and repair emerged – a standard route that eliminates some damage and a moderate amount of errors, and an elite route that eliminates the large majority of damage and errors from our DNA.

Only the small portion of our DNA that directs the creation of all the proteins we are made of – proteins in blood cells, heart cells, liver cells and so on – takes the elite route, which uses much more energy and so uses more of the body’s resources. The remaining majority of our DNA, which is not responsible for creating proteins, takes the standard route, which requires fewer resources. Scientists have never understood what controls which pathway a given piece of DNA would go down. The study authors found, that like a policeman directing traffic at a busy intersection, acetylation directs which proteins take which route, favoring the protection of DNA that creates proteins by shuttling them down the elite, more accurate course.

The majority of current aging-related research attempts to zero-in on specific agents that damage our DNA, called reactive oxygen species, and how to reduce them. The new research, however, represents a completely different approach.

“If we found a way to improve the protection of DNA that guides protein production, basically boosting what our body already does to eliminate errors, it could help us live longer,” said researcher Lata Balakrishnan. “A medication that would cause a small alteration in this acetylation-based regulatory mechanism might change the average onset of cancers or neurological diseases to well beyond the current human lifespan.”

The researchers are now studying human and yeast cell systems to determine how proteins in cells work together to trigger acetylation.