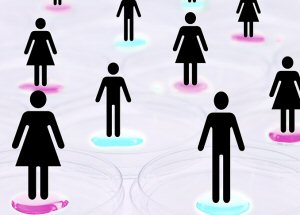 Algal blooms that occur in rivers and waterways have been found to produce a previously unrecognized estrogen-like compound that adversely affects fish, plants and humans by disrupting the normal activity of reproductive hormones.

University of Tennessee researchers, led by biotechnologist Theodore Henry, compared groups of larval zebrafish exposed to blue-green algae (Microcystis) cells with those exposed to only the well-studied toxin they produce. They found that only the fish in contact with the blue-green algal cells tested positive for a well known estrogenic biomarker. This led them to conclude the algal blooms were producing a previously unrecognized substance which is an estrogen-like compound that acts as an endocrine disruptor.

"The induction of these genes is consistent with presence of an estrogen and it is possible that many adverse affects may occur in fish populations," said Henry, "from physical feminization of male fish to behavioral changes, increased environmental estrogen levels can impact male territorial defending and even their nest-building habit. Environmentally released estrogen has not been shown to affect reproduction, but studies are still being conducted on the subject."

Possible human health effects include skin rashes, fever and liver damage. Studies of estrogenic compounds and human reproductive fitness have linked them to a variety of detrimental effects on male fertility. With algal blooms occurring more frequently worldwide, the UT researchers behind the findings are calling for a revision of environmental monitoring programs to gauge the prevalence and effects of these substances.