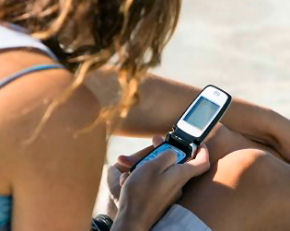 Experiments by German psychologists indicate that text messaging is subtly changing the way our brains respond to certain number combinations. Reporting their findings in the journal Psychological Science, the researchers say that just by typing the numbers that correspond to the letters in a word like "love," we can activate the meaning of that word in our minds.

Research leader Sascha Topolinski, from the University of W�rzburg, created a list of German words that can be typed on a cell phone keypad without typing the same digit twice in a row. Additonally, each number combination could spell only one word.

For one experiment, Topolinski used a set of number sequences that correspond to positive words, like 54323 ("liebe" - love) and 373863 ("freund" - friend), and a set for negative words, like 7245346 ("schleim" - slime) and 26478 ("angst" - fear). Volunteers were handed a cell phone with stickers over the buttons so they could only see the numbers and were told to type the number sequences. After typing each one, they rated how pleasant it had been to dial the number on the phone. The subjects believed they were participating in a study on ergonomics - none had any idea that the numbers might relate to words.

Topolinski's team found that the subjects preferred dialing numbers that related to positive words over those related to negative words. Merely dialing the numbers that corresponded to those letters was enough to activate the concepts in their minds.

The findings could relate to a concept called "embodiment" - the idea that certain body movements can make you think about related ideas. Clenching a fist makes people think about power, for example, and holding a heavy clipboard makes them think something is important. "But this is a new door in embodiment research," Topolinski says. "Participants always did some finger movements. They just typed numbers in the cell phone. But I could induce 'slime' or 'love' - any meaning. This was a kind of a motor cipher that you can encode into the muscle system and use to induce a variety of ideas in participants."

The research has practical implications for businesses. In another experiment, Topolinski had volunteers type numbers that were supposed to go with specific types of businesses; a word that implied the German word for "jewelry" for a jeweler, or "apartment" for a rental office. After dialing the phone number and hearing an answering machine message, volunteers rated the business on its attractiveness. When the number matched the business, volunteers gave the business a higher rating than when they were mismatched; for example, a number for "wealth" for a financial counsel. "If you are a lawyer, try to get a phone number which implies the word 'justice,' or if you have a donation hotline, include the sequence 4483 for 'give,'" Topolinski recommended.