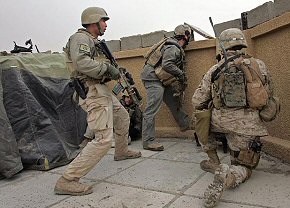 Composed mainly of plastic, improvised explosive devices (IEDs) are notoriously hard to detect. They are typically used by guerillas or terrorist groups in conflict zones, and they kill or mutilate hundreds of thousands of people every year. But researchers at France's Ecole Polytechnique Fédérale de Lausanne (EPFL) believe they may have found a way to detonate them remotely using electromagnetic pulses. The two researchers, Félix Vega and Nicolas Mora, both from Colombia, conducted the research as part of their doctoral studies at EPFL.

In order to scan the highest possible number of frequencies, the researchers concentrated on creating short impulses at different frequencies. But by emitting such a wide spectrum, only a fraction of the pulse's power reached the target, and the energy was no longer strong enough to trigger detonation.

"We then realized that in spite of the wide diversity of these mines, they are however all in similar frequency ranges," explains Mora. "So we developed a system that concentrates on those, and thus loses less energy."

After two years work, EPFL's Electromagnetic Compatibility Laboratory tested the system in Colombia last year, using actual improvised devices provided by a team of bomb disposal experts. Impressively, the devices were able to be detonated at an average distance of 20 meters. "Now we have to develop a smaller prototype that is weather-resistant and especially easier to transport in the field," said Vega.