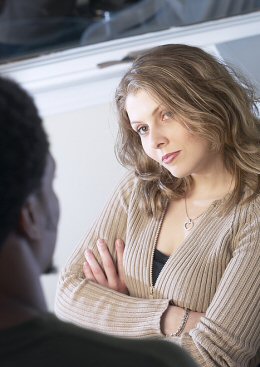 People tend to be attracted to, and have relationships with, other people who resemble themselves in terms of personality, values, and physical appearance. However, these features only skim the surface of what makes a relationship work. The ways that people talk are also important, according to a new study in Psychological Science, which suggests that people who speak in similar styles are more compatible.

The study focused on words the researchers call "function words." These are words that show how other words relate. They're hard to explicitly define, but we use them all the time - words like the, a, be, anything, that, will, him, and and. How we use these words constitutes our writing and speaking style, says study co-author James Pennebaker, of the University of Texas at Austin.

"Function words are highly social and they require social skills to use," he explained. "For example, if I'm talking about the article that's coming out, and in a few minutes I make some reference to 'the article,' you and I both know what the article means. But someone who wasn't part of that conversation wouldn't understand." Pennebaker and his colleagues examined whether the speaking and writing styles couples adopt during conversation with each other could predict future dating behavior and the long-term strength of the relationship. They conducted two experiments in which a computer program compared partners' language styles.

In the first experiment, pairs of college students had four-minute speed dates while their conversations were recorded. Almost every pair covered the same topics: What's your major? Where are you from? How do you like college? Every conversation sounded more or less the same to the naked ear, but text analysis revealed stark differences in language synchrony. The pairs whose language style matching scores were above average were almost four times as likely to want future contact as pairs whose speaking styles were out of sync.

What people are saying to each other is important, but how they are saying it may be even more telling. People aren't consciously synchronizing their speech, Pennebaker notes. "What's wonderful about this is we don't really make that decision; it just comes out of our mouths."