You are here: Home › News › Physics › Satellite catches thunderstorm producing antimatter bursts
By Will Parker on January 12, 2011 in News, Physics 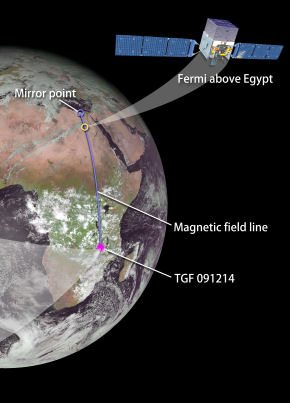 Astronomers using the Fermi Gamma-ray Space Telescope in orbit above the Earth have detected beams of antimatter produced above terrestrial thunderstorms, a phenomenon never seen before. They believe the antimatter particles were formed in aterrestrial gamma-ray flash (TGF), a brief burst associated with lightning and produced inside thunderstorms. “These signals are the first direct evidence that thunderstorms make antimatter particle beams,” said Michael Briggs, from Fermi’s Gamma-ray Burst Monitor team. He presented the findings on Monday at the American Astronomical Society meeting in Seattle.

Although Fermi is designed to observe high-energy events in the universe, it’s also providing valuable insights into Earthbound TGF phenomena. The satellite has identified 130 TGFs since its launch in 2008. “In orbit for less than three years, the Fermi mission has proven to be an amazing tool to probe the universe. Now we learn that it can discover mysteries much, much closer to home,” said Ilana Harrus, a Fermi program scientist at NASA.

Briggs explained that during one TGF, which occurred on Dec. 14, 2009, Fermi was located over Egypt. But the active storm was in Zambia, some 2,800 miles to the south. The distant storm was below Fermi’s horizon, so any gamma rays it produced could not have been detected.

Although Fermi couldn’t see the storm, the TGF produced high-speed electrons and positrons, which then “rode up” Earth’s magnetic field to strike the spacecraft. The beam continued past Fermi, reached a location, known as a mirror point, where its motion was reversed, and then hit the spacecraft a second time just 23 milliseconds later. Each time, positrons in the beam collided with electrons in the spacecraft. The particles annihilated each other, emitting gamma rays detected by Fermi’s GBM.

Scientists long have suspected TGFs arise from the strong electric fields near the tops of thunderstorms. Under the right conditions, they say, the field becomes strong enough that it drives an upward avalanche of electrons. Reaching speeds nearly as fast as light, the high-energy electrons give off gamma rays when they’re deflected by air molecules. Normally, these gamma rays are detected as a TGF.

But the cascading electrons produce so many gamma rays that they blast electrons and positrons clear out of the atmosphere. This happens when the gamma-ray energy transforms into a pair of particles: an electron and a positron. It’s these particles that reach Fermi’s orbit.