You are here: Home › News › Scientists create offspring from same-sex parents
By Will Parker on December 9, 2010 in News 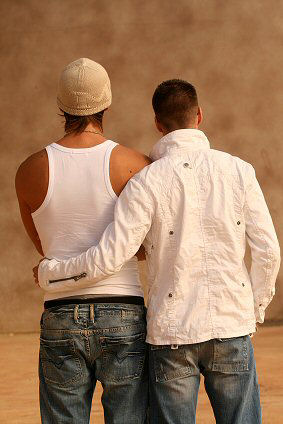 Using stem cell technology, reproductive scientists at the M.D. Anderson Cancer Center have produced male and female mice from two fathers. Lead researcher Richard R. Berhringer said the knowledge gained could help in preserving endangered species and improving livestock breeds, as well as opening up the possibility of same-sex couples having their own genetic children.

In the journal Biology of Reproduction, Behringer explains how his team manipulated fibroblasts from a male (XY) mouse fetus to produce an induced pluripotent stem (iPS) cell line. About one percent of iPS cell colonies grown from this XY cell line spontaneously lost the Y chromosome, resulting in XO cells. The XO iPS cells were injected into blastocysts from donor female mice. The treated blastocysts were transplanted into surrogate mothers, which gave birth to female XO/XX chimeras having one X chromosome from the original male mouse fibroblast.

The female chimeras, carrying oocytes derived from the XO cells, were mated with normal male mice. Some of the offspring were male and female mice that had genetic contributions from two fathers. “Our study exploits iPS cell technologies to combine the alleles from two males to generate male and female progeny, a new form of mammalian reproduction,” said Behringer.

The technique described in this study could be applied to agriculturally important animal species to combine desirable genetic traits from two males without having to outcross to females with diverse traits. “It is also possible that one male could produce both oocytes and sperm for self-fertilization to generate male and female progeny,” Behringer points out. Such a technique could be used for preserving species when no females remain.

In the future, it may also be possible to generate human oocytes from male iPS cells in vitro. Used in conjunction with in vitro fertilization, this would eliminate the need for female XO/XX chimeras, although a surrogate mother would still be needed to carry the two-father pregnancy to term. Using a variation of the iPS technique, the researchers posit that; “it may also be possible to generate sperm from a female donor and produce viable male and female progeny with two mothers.”

Source: Society for the Study of Reproduction