You are here: Home › News › Revealed! The elegant physics of cat lapping
By Will Parker on November 12, 2010 in News 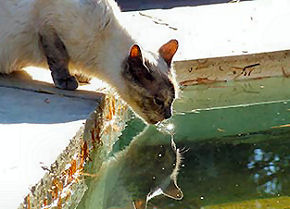 The gravity-defying grace and exquisite balance of our feline friends extends to the way they lap-up their milk; which MIT, Virginia Tech and Princeton University engineers have found is a perfect balance between two physical forces.

Reporting their findings in the journal Science, the researchers explain that when cats lap, they extend their tongues straight down toward the bowl with the tip of the tongue curled backwards like a capital “J.” But this “ladle” does not actually scoop-up the milk. Rather, only the top surface of the tongue actually touches the liquid.

It turns out that, unlike dogs, cats aren’t dipping their tongues into the liquid at all. Instead, the cat’s lapping mechanism is far more subtle and elegant. The smooth tip of the tongue barely brushes the surface of the liquid before the cat rapidly draws its tongue back up. As it does so, a column of milk forms between the moving tongue and the liquid’s surface. The cat then closes its mouth, pinching off the top of the column for a nice drink, while keeping its chin dry.

The liquid column is created by a delicate balance between gravity, which pulls the liquid back to the bowl, and inertia, which in physics, refers to the tendency of the liquid or any matter, to continue moving in a direction unless another force interferes. The cat instinctively knows just how quickly to lap in order to balance these two forces, and just when to close its mouth. If it waits another fraction of a second, the force of gravity will overtake inertia, causing the column to break, the liquid to fall back into the bowl, and the cat’s tongue to come up empty.

While the domestic cat averages about four laps per second, with each lap bringing in about 0.1 milliliters of liquid, the big cats, such as tigers, know to slow down. They naturally lap more slowly to maintain the balance of gravity and inertia.

“In the beginning of the project, we weren’t fully confident that fluid mechanics played a role in cat’s drinking. But as the project went on, we were surprised and amused by the beauty of the fluid mechanics involved in this system,” said researcher Sunghwan Jung, an engineer whose work focuses on soft bodies, like fish, and the fluids surrounding them.

To better understand the subtle dynamics of lapping, they also created a robotic version of a cat’s tongue that moves up and down over a dish of water, enabling the researchers to systematically explore different aspects of lapping, and ultimately, to identify the mechanism underpinning it.

“Our process in this work was typical, archetypal really, of any new scientific study of a natural phenomenon. You begin with an observation and a broad question, ‘How does the cat drink?’ and then try to answer it through careful experimentation and mathematical modeling,” said MIT’s Pedro Reis, a physicist who works on the mechanics of soft solids. “To us, this study provides further confirmation of how exciting it is to explore the scientific unknown, especially when this unknown is something that’s part of our everyday experiences.”