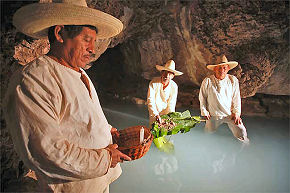 Every Easter, over many centuries, the Zoque people of southern Mexico have ventured into the sulfuric cave Cueva del Azufre to implore their deities for a bountiful rain season. As part of the annual ritual, they release into the cave's waters a distinctive, leaf-bound paste made of lime and the ground-up root of the barbasco plant, a natural fish toxin. Believing the cave's fish to be gifts from their gods, they scoop up their poisoned prey to feast upon until their crops are ready to harvest.

Now, a team of researchers led by Dr. Michael Tobler, an evolutionary ecologist at Oklahoma State University, and Dr. Gil Rosenthal, a biology professor at Texas A&M, has discovered that some of these fish have managed not only to develop a resistance to the plant's powerful toxin, but also to pass on their tolerant genes to their offspring, enabling them to survive in the face of otherwise certain death for their less evolved cousins.

After learning about the Zoque people's sacred ritual and witnessing the event firsthand in 2007, Tobler and Rosenthal decided to investigate the effects of this peculiar ceremony on the fish (Poecilia Mexicana) and their habitat. Unfortunately though, it was the last ceremony ever held, as the Zoques ended the practice that year due to political pressure from the government, which sought to preserve the cave for tourism purposes.

They found that the fish annually exposed to the barbasco indeed were more resistant than the fish further upstream - to the extent that they were able to swim in the noxious water nearly 50 percent longer. Tobler and Rosenthal's group concluded that human beings had, over time, not only affected fish population dynamics, but also inadvertently kick-started the evolutionary process of natural selection as well.

Fish able to tolerate the poisonous conditions survived and passed those traits to their offspring, resigning those that perished to their fate of serving as a ceremonial feast for the Zoque. "The cool thing is that this ceremony has gone on a long time and that the fish responded to it evolutionarily," Tobler says. "Lots of species couldn't live with these changes. It highlights how nature is affected by human activity."

Rosenthal contends that the idea of imposing evolutionary divergence on a species at an extremely localized spatial scale is not a new concept. In fact, he says, it's been happening since the beginning of mankind and that the idea of the "noble savage" is passé. "We tend to have this wonderful Pocahontas idea that before Europeans came in, everything was pristine and in harmony with nature and that all of the changes in our environment have been post-industrialization," he explains. "No. People have been changing the environment forever."