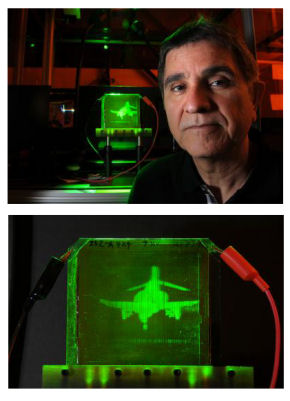 Reporting the work in Nature, research leader Pierre-Alexandre Blanche (pictured) explained that the system incorporates a novel, photorefractive polymer - one that can rapidly refresh holographic images and is scalable for production - coupled to a unique system for recording and transmitting 3D images of individuals and objects via standard Ethernet.

"This advance brings us a step closer to the ultimate goal of realistic holographic telepresence with high-resolution, full-color, human-size, 3D images that can be sent at video refresh rates from one part of the world to the other," says co-researcher Nasser Peyghambarian.

"This breakthrough opens new opportunities for optics as a means to transport images in real time," commented Lynn Preston, director of the National Science Foundations Engineering Research Centers program that supported the research. "Such a system can have an important impact on telepresence, telemedicine, engineering design and manufacturing, and other applications. This is an early and tremendously important outcome from this three-year old center."