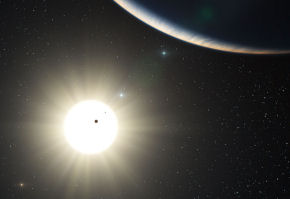 Astronomers working at the European Southern Observatory (ESO) have discovered a planetary system 127 light-years away that contains at least five planets that orbit the star HD 10180 at distances that follow a regular pattern much like our own solar system.

"We have found what is most likely the system with the most planets yet discovered," said Christophe Lovis, lead author of the paper reporting the result. "This remarkable discovery also highlights the fact that we are now entering a new era in exoplanet research: the study of complex planetary systems and not just of individual planets."

The team of astronomers used ESO's 3.6-metre telescope at La Silla, Chile, for a six-year-long study of HD 10180 located in the southern constellation of Hydrus (the Male Water Snake). The astronomers detected the tiny back and forth motions of the star caused by the complex gravitational attractions from five or more planets. The five strongest signals correspond to planets with Neptune-like masses - between 13 and 25 Earth masses - which orbit the star with periods ranging from about 6 to 600 days. These planets are located between 0.06 and 1.4 times the Earth-Sun distance from their central star.

"We also have good reasons to believe that two other planets are present," says Lovis, adding that one would be a Saturn-like planet and the other would be the least massive exoplanet ever discovered, with a mass of about 1.4 times that of the Earth. The smaller planet is believed to be very close to its host star, at just 2 percent of the Earth-Sun distance. A year on this planet would last only 1.18 Earth-days.

The newly discovered system of planets around HD 10180 is unique in several respects. With at least five Neptune-like planets lying within a distance equivalent to the orbit of Mars, the system is more populated than our solar system in its inner region, and has many more massive planets there. Additionally, the system probably has no Jupiter-like gas giant. In addition, all the planets seem to have almost circular orbits.

Using the new discovery as well as data for other planetary systems, the astronomers found an equivalent of the Titius-Bode law that exists in our solar system: the distances of the planets from their star seem to follow a regular pattern. "This could be a signature of the formation process of these planetary systems," says team member Michel Mayor.