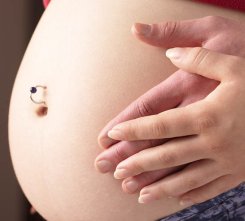 The hormone oxytocin has come under intensive study in light of emerging evidence that its release contributes to the social bonding that occurs between lovers and friends. It was known that birth and lactation boost oxytocin levels in new mothers and now researchers have found a link between oxytocin in new fathers and the quality of interactions they have with their new offspring. Appearing in the journal Biological Psychiatry, this is the first study to address the involvement of oxytocin in the transition to fatherhood.

The new study evaluated 80 couples twice after the birth of their first child, at 6 weeks and 6 months, by measuring each parents' oxytocin levels and monitoring and coding their parenting behavior. The researchers observed that although oxytocin release is stimulated by birth, lactation and affectionate touch in mothers, in fathers, oxytocin was increased with more stimulatory contact, encouragement of exploration, and direction of infant attention to objects.

According to researcher Ruth Feldman, the findings, "emphasize the importance of providing opportunities for father-infant interactions immediately after childbirth in order to trigger the neuro-hormonal system that underlies bond formation in humans."

Additionally, the study speculates that the results could be indicative of distinct circuit effects of oxytocin in the male and female brain and may now provide a foundation for studies of disturbances in oxytocin function in high risk parenting.