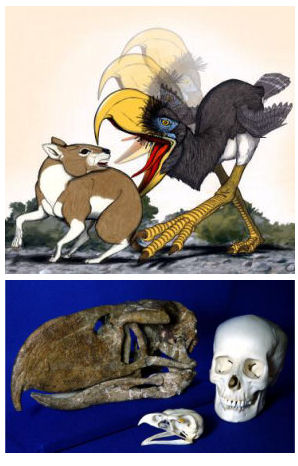 Andalgalornis couldn't fly, but it used its unusually large, rigid skull - together with a hawk-like hooked beak - for a fighting strategy reminiscent of boxer Muhammad Ali. The agile creature repeatedly attacked and retreated, landing well-targeted, hatchet-like jabs to take down its prey, say researchers who have been examining fossils of this ancient "terror bird."

The study, in the journal PLoS ONE, is the first detailed look at the predatory style of a member of an extinct group of large, flightless birds known scientifically as phorusrhacids, but popularly labeled "terror birds" because of their fearsome skull and often imposing size. Terror birds evolved about 60 million years ago in South America, radiating into about 18 known species ranging in size up to the 7-foot-tall Kelenken.

Article co-author Lawrence Witmer, of the Ohio University College of Osteopathic Medicine, ran a complete skull of Andalgalornis through a CT scanner, which provided a glimpse into the inner architecture of the skull. "Birds generally have skulls with lots of mobility between the bones, which allows them to have light but strong skulls. But we found that Andalgalornis had turned these mobile joints into rigid beams. This guy had a strong skull, particularly in the fore-aft direction, despite having a curiously hollow beak," said Witmer.

From the CT scans, the team assembled sophisticated 3D engineering models of the terror bird and two living species for comparison (an eagle, as well as the terror bird's closest living relative, the seriema). The researchers then simulated and compared the biomechanics of biting straight down (as in a killing bite), pulling back with its neck (as in dismembering prey) and shaking the skull from side to side (as in thrashing smaller animals or when dealing with larger struggling prey). Color images created by the program show cool-blue areas where stresses are low and white-hot areas where stresses get dangerously high.

The engineering simulations supported the CT-based anatomical results. "Relative to the other birds considered in the study, the terror bird was well-adapted to drive the beak in and pull back with that wickedly recurved tip of the beak," remarked co-researcher Stephen Wroe, "but when shaking its head from side to side, its skull lights up like a Christmas tree. It really does not handle that kind of stress well at all."

A key part of the engineering analysis was determining how hard of a bite Andalgalornis could deliver. "We discovered that the bite force of Andalgalornis was a little lower than we expected and weaker than the bite of many carnivorous mammals of about the same size. Andalgalornis may have compensated for this weaker bite by using its powerful neck muscles to drive its strong skull into prey like an axe," the study notes.