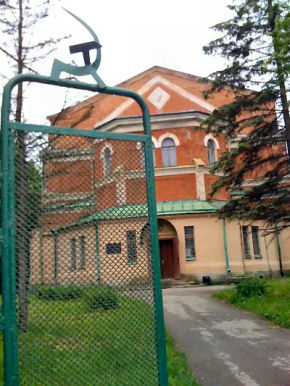 A frantic appeal has been made directly to the Russian government to save Europe's largest fruit and berry seed bank from real estate developers. The Pavlovsk Experiment Station is the largest European field genebank for fruits and berries, and is part of the N.I. Vavilov Research Institute of Plant Industry, where Russian scientists famously starved to death rather than eat the seeds under their protection during the 900-day siege of Leningrad during World War II.

At issue is an effort by residential real estate developers to build houses on the land occupied by Pavlovsk Station. The take-over would involve bulldozing Pavlovsk's field collections amassed over the last century - collections that contain thousands of varieties of apples, strawberries, cherries, raspberries, currants and other crops - 90 percent of which are not found anywhere else in the world.

"It is a bitter irony that the single most deliberately destructive act against crop diversity, at least in my lifetime, could be about to happen in Russia of all places - the country that invented the modern seed bank," said Cary Fowler of the Global Crop Diversity Trust.

Vavilov himself was persecuted for his views on plant genetics and died of malnutrition in prison in 1943. But Russia later renounced his treatment and has since treated Vavliov as a hero. Today, the N.I. Vavilov Research Institute of Plant Industry remains one of the world's most important conservers of crop diversity.

Pavlovsk Station is a key part of Vavilov's legacy to Russia and the world. The field bank was built up initially by collecting local varieties from around European Russia, Siberia and the Far East, as well as accessions collected in the late 19th and early 20th centuries by plant scientists and botanists. After World War II, Pavlovsk Station continued efforts to collect unique crop diversity from all over the world, including samples of apple trees from 35 countries; strawberry from 40 countries; black currant from 30 countries; plum and cherry plum from 12 countries; and honeysuckle from Russia and Canada.

As Pavlovsk is predominantly a field collection, it cannot simply be moved. Fowler and other experts estimate that even if another site were available nearby - and there is not one - it would take many years to relocate. There are efforts underway to craft an emergency relocation plan, but technical and logistical challenges make it unlikely that more than a small fraction of the collection could be transferred. For example, the most suitable sites for relocation are likely outside of Russia, raising complicated legal questions and quarantine issues.

In an astonishingly Kafkaesque piece of logic, the property developers maintain that because it contains a "priceless collection," no monetary value can be assigned to Pavlovsk Station, so, therefore, it is essentially worthless. Furthermore, the Federal Fund of Residential Real Estate Development has argued that the collection was never officially registered and thus it does not officially exist.

Related:
"Sign" a petition at the Global Crop Diversity Trust
Botanic Mechanics Celebrate 150 Year Long Experiment
Yes, We Have No Bananas
Chernobyl: No People But A Thriving Ecosystem
Rise of the Superweed - Science a GoGo's Discussion Forums
Grants to spur search for more robust crops
Threat From Plummeting Biodiversity Qualified