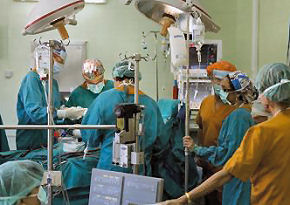 "Based on the monitoring records of spongiform encephalopathy in two Nordic countries, we studied the possibility of transmission of the sporadic form of Creutzfeldt-Jakob disease through general surgery," explains Jes�s de Pedro, main author of the study and head of prion monitoring in patients at the National Epidemiology Centre of the Carlos III Health Institute.

"While we are not ruling out the idea that intraoperational transfusions may play a secondary part, the data suggest that the disease enters and spreads much more quickly within the central or peripheral nervous system," says De Pedro.

The finding indicates an external cause of neuronal diseases that could be prevented, and, according to De Pedro; "it may signify a shift in our understanding of the nature of neurodegenerative diseases, such as Alzheimer's or Parkinson's."

"We might, therefore, ask ourselves if other types of motor neuron diseases can be transmitted through surgery and be latent for decades, such as those where risk factors, particularly physical professions and activities or certain sporting activities, for example, which are more likely to lead to surgery, have already been indicated," he added.