You are here: Home › News › Stroke me, baby! Touching body-parts can prevent stroke, suggests study
By Will Parker on July 14, 2010 in News 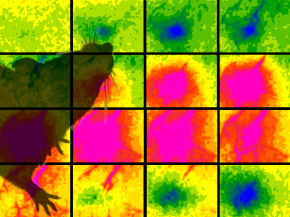 The most common type of stroke can be completely prevented in rats by stimulating a single whisker; say researchers from the University of California, Irvine (UCI). They further suggest that because we have sensitive body parts wired to the same area of the brain as rodents’ fine-tuned whiskers, stimulation of the fingers, lips or face could all have a similar effect in humans.

UCI researcher Ron Frostig cautions that the research, funded by the National Institutes of Health, is only a first step, albeit an important one. “This is just the beginning of the whole story,” he says, “with the potential for maybe doing things before a victim even reaches the emergency room.”

Frostig and his co-researchers discovered that mechanically stroking just one whisker for four minutes within the first two hours of the blockage caused the blood to quickly flow to other arteries – like cars exiting a gridlocked freeway to find detours.

But unlike freeway off-ramps, which can quickly clog, the alternate arteries expanded beyond their normal size, opening wide to allow critical blood flow to the brain. Astonishingly, the technique was 100 percent effective in preventing strokes in rats with arterial obstruction. University of California (San Diego) neuroscientist David Kleinfeld, who has also studied brain structure and strokes, calls the results “unexpected and spectacular.”

However, Kleinfeld cautions that the rodent findings might not be relevant to humans. But with such clear evidence that strokes in rats were prevented, he says, “it would be criminal not to try” controlled human studies. To that end, the UCI team are hoping to locate physicians or emergency medical technicians willing to try the technique on patients with early stroke symptoms.

Acoustic fabric functions as speaker and microphone
Finally! Something that eats jellyfish