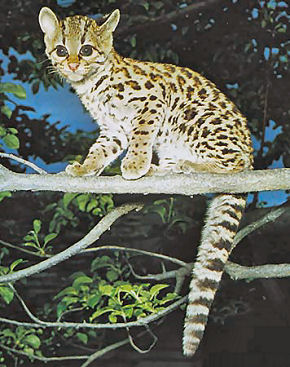 The extraordinary behavior was recorded by researchers from the Wildlife Conservation Society (WCS) and Federal University of Amazonas (UFAM) in the Amazonian forests of Brazil. The observations confirmed what until now had been only anecdotal reports from Amazonian inhabitants of wild cat species - including jaguars and pumas - mimicking primates and other species in order to draw them within striking range.

"Cats are known for their physical agility, but this vocal manipulation of prey species indicates a psychological cunning which merits further study," reported WCS researcher Fabio Rohe in the current issue of Neotropical Primates.

Researchers observed the trickery when a group of eight pied tamarins were feeding in a ficus tree. They then observed a margay emitting calls similar to those made by tamarin babies. This attracted the attention of a tamarin "sentinel," which climbed down from the tree to investigate the sounds coming from a tangle of vines called lianas.

While this specific instance of mimicry was unsuccessful, researchers were amazed at the ingenuity of the hunting strategy. "This observation further proves the reliability of information obtained from Amazonian inhabitants," said Dr. Avecita Chicch�n, director of the WCS's Latin America Program. "This means that accounts of jaguars and pumas using the same vocal mimicry to attract prey - but not yet recorded by scientists - also deserve investigation."