You are here: Home › News › Super-high pressures used to create super “battery”
By Will Parker on July 5, 2010 in News 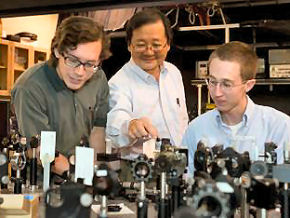 At normal atmospheric pressure, the material’s molecules stay relatively far apart from each other. But as the pressure inside the chamber is increased, the material becomes a two-dimensional graphite-like semiconductor.

Yoo eventually increased the pressure to more than a million atmospheres, comparable to what would be found halfway to the center of the Earth. The squeezing forced the molecules to make tightly bound three-dimensional metallic network structures. In the process, the huge amount of mechanical energy of compression was stored as chemical energy in the molecules’ bonds.