You are here: Home › News › Synthetic antibodies successfully tested in mammals
By Will Parker on June 22, 2010 in News 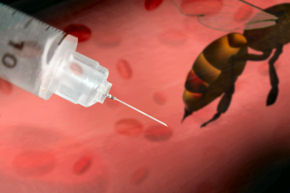 Researchers from the University of California – Irvine (UCI) have created the first “plastic antibodies” to be successfully employed in live organisms – stopping the spread of bee venom through the bloodstream of mice.

The tiny polymeric particles – just 1/50,000th the width of a human hair – were designed to match and encase melittin, a peptide in bee venom that causes cells to rupture. Large quantities of melittin can lead to organ failure and death.

When injected into mice given high doses of melittin, these imprinted nanoparticles enveloped the matching melittin molecules, capturing them before they could disperse and wreak havoc, greatly reducing fatalities among the rodents.

“Never before have synthetic antibodies been shown to effectively function in the bloodstream of living animals,” noted Shea. “This technique could be utilized to make plastic nanoparticles designed to fight more lethal toxins and pathogens.”

Unlike natural antibodies produced by live organisms and harvested for medical use, synthetic antibodies can be created in laboratories at a lower cost and have a longer shelf life. “The bloodstream includes a sea of competing molecules, such as proteins, peptides and cells, and presents considerable challenges for the design of nanoparticles,” Shea explained. “The success of this experiment demonstrates that these challenges can be overcome.”