You are here: Home › News › Bone marrow transplant cures mental illness
By Will Parker on May 28, 2010 in News 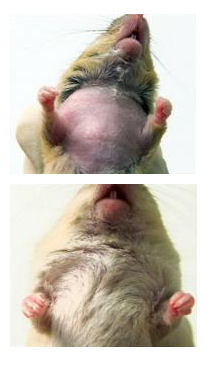 “We’re showing there is a direct relationship between a psychiatric disorder and the cells named microglia that are derived from bone marrow and are found in the brain,” says Mario Capecchi, a distinguished professor of human genetics at the University of Utah School of Medicine. “There’s been an inference. But nobody has previously made a direct connection between the two.”

Capecchi’s research team showed that pathological grooming and hair-pulling in mice – a disorder similar to trichotillomania in humans – is caused by a mutant Hoxb8 gene. Mice with pathological grooming appear to groom normally, but do so too often and for too long, leading to hair removal and self-inflicted skin wounds. The mutant gene results in defective microglia, which are immune system cells that originate in bone marrow and migrate from blood to the brain. Microglia defend the brain and spinal cord, attacking and engulfing infectious agents.

In the experiment, the researchers transplanted bone marrow from normal mice into 10 mice that had a mutant Hoxb8 gene and compulsively pulled out their own chest, stomach and side fur. As the transplant took hold during ensuing months, grooming behavior became normal, four mice recovered completely and the other six showed extensive hair growth and healing of wounds. “A lot of people are going to find it amazing,” says Capecchi. “That’s the surprise: bone marrow can correct a behavioral defect.”

Capecchi says previous studies have linked the immune system and psychiatric disorders, but not in a cause-and-effect manner. “If you look at people who are depressed, often you find their immune system isn’t working normally,” Capecchi says. “And studies have shown that genes that confer a higher rate of depression, schizophrenia, obsessive-compulsive disorder, bipolar disorder and autism also have something to do with the immune system.”

Bone marrow transplants are expensive, and the risks and complications are so severe they generally are used only to treat life-threatening illnesses, such as cancer. But the findings – published in the journal Cell – may inspire researchers “to think about potential new immune-based therapies for psychiatric disorders,” says Capecchi.