Risky business and a woman's touch 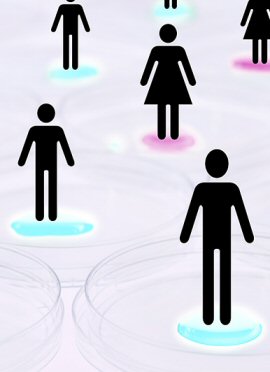 A woman's touch is all it takes for people to throw caution to the wind. At least that's according to a new study published in Psychological Science. The study found that if a female experimenter patted participants on the back during a financial simulation the participants risked more money, whereas similar patting from a male researcher had no effect. The researchers believe the effect comes from the way that mothers use touch to make their babies feel secure.

As infants, we receive a lot of physical contact from our mothers which creates a sense of attachment and security. This assists us in learning about our environment as we are more willing to take the risks that come with exploring unfamiliar contexts and strange situations. Researchers Jonathan Levav of Columbia University and Jennifer J. Argo of the University of Alberta wanted to know what happens when we grow up. Specifically, does physical contact also affect how willing adults are to take risks?

The participants in the study were tested to see if they would take risks, such as investing money or taking a gamble. When they started the experiment, they were greeted in different ways: by a female or male experimenter and with a light, comforting touch on the shoulder, a handshake, or no physical contact at all.

At the end of the experiment, they also filled out surveys that assessed how secure they felt. The researchers found that participants who were touched felt more secure and took bigger risks than those who weren't - but only if they were touched by a woman. The effect was stronger for a touch on the back than for a handshake, but went away entirely for participants who were touched by a man. The results suggest that a woman's touch works the same on adults as it does on infants: making them feel more secure and more willing to take risks.