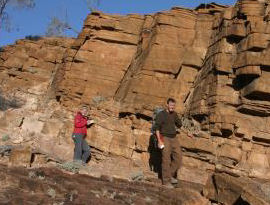 A massive glaciation event that occurred around 720 million years ago is yielding important clues as to how anomalies in Earth's carbon cycle can occur. A Princeton University-led team of geologists suggest that a geological episode called "snowball Earth" (which many believe covered the continents and oceans in a thick sheet of ice) produced a dramatic change in the carbon cycle. This change in the carbon cycle, in turn, may have triggered future ice ages.

Published in the journal Science, the new work shows how changes to the Earth's surface wrought by the glaciers of the Neoproterozoic Era could have created the anomaly in carbon cycling. "The Neoproterozoic Era was the time in Earth history when the amount of oxygen rose to levels that allowed for the evolution of animals, so understanding changes to the carbon cycle and the dynamics of the Earth surface at the time is an important pursuit," said Princeton's Nicholas Swanson-Hysell, the first author on the paper.

The "snowball Earth" theory suggests that the Sturtian glaciation was global in scope, encasing the planet in ice, which could have wreaked havoc on the normal functioning of the carbon cycle. While the theory is controversial and the extent of the deep freeze is under investigation, research team member Adam Maloof co-wrote a March 2010 Science paper demonstrating that glaciers reached the equator some 716.5 million years ago, providing further evidence to support the existence of a Cryogenian "snowball Earth."

Their results documented a peculiar and large shift in the carbon cycle. "The disturbance we're seeing in the Neoproterozoic carbon cycle is larger by several orders of magnitude than anything we could cause today, even if we were to burn all the fossil fuels on the planet at once," noted Maloof.

The perturbation studied by the Princeton researchers shows this same behavior during an event that was roughly 25 percent larger and 100 million years older than the previously recognized disturbance. The team also documented that the carbon cycle was not operating in this bizarre fashion 800 million years ago prior to the first Neoproterozoic glaciations, constraining in time the onset of such behavior and firmly linking it to the "snowball Earth" event.

"The new carbon isotopic data shows a whopping downshift in the isotopic composition of carbonate, possibly the largest single isotopic change in Earth history, while the isotopic composition of organic carbon is invariant," said Rothman, who was not part of the research team. "The co-occurrence of such signals is enigmatic, suggesting that the carbon cycle during this period behaved fundamentally differently than it does today."

Building on Rothman's work, the researchers set out to explain how an ice-covered globe in the early Cryogenian period could have prompted the accumulation of massive amounts of organic carbon in the ocean, leading to the observed disturbance to the carbon cycle later in the period.

According to Rothman's hypothesis, over millions of years the levels of oceanic and atmospheric oxygen would have grown as a consequence of the altered carbon cycle, ultimately leading to the oxidation of the large reservoir of organic carbon, removing the extra organic carbon from the oceans and returning the carbon cycle to a steady state more similar to how it functions today. Increased levels of oxygen in the atmosphere also would have provided the conditions that were necessary for the explosive diversification of animal life at the end of the Neoproterozoic and into the Cambrian Period.