You are here: Home › News › Discovery of asteroid water hints at oceans’ origins
By Will Parker on April 29, 2010 in News 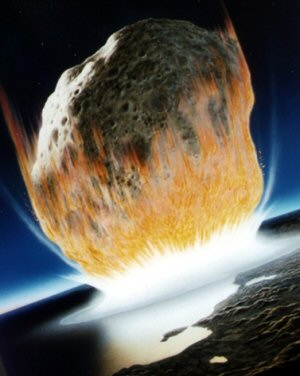 Scientists from the University of Central Florida (UCF) have detected a thin layer of water ice and organic molecules on the surface of the asteroid 24 Themis, a finding that adds weight to the theory that Earth’s oceans resulted from an ancient asteroid impact. The unexpected findings are to be published in Nature.

“What we’ve found suggests that an asteroid like this one may have hit Earth and brought our planet its water,” mused UCF Physics Professor Humberto Campins, the study’s lead author. Some scientists have previously suggested that asteroids brought water to Earth after the planet formed dry and the salts and water that have been found in some meteorites do support this theory.

To make the discovery, Campins used NASA’s Infrared Telescope Facility in Hawaii to measure the intensity of reflected sunlight as the asteroid rotated. The differences in light intensity at different wavelengths helped his team determine the makeup of the asteroid’s surface.

They were surprised to find ice and carbon-based compounds evenly distributed on 24 Themis. More specifically, the discovery of ice is unexpected because surface ice should be short lived on asteroids, which are expected to be too warm for ice to survive for long. Campins adds that the distance between this asteroid and the sun is about three times greater than between the Earth and the sun.

The researchers will continue testing various hypotheses to explain the presence of the ice. Perhaps most promising is the possibility that 24 Themis might have preserved the ice in its subsoil, just below the surface, as a kind of “living fossil” or remnant of an early solar system that was generally considered to have disappeared long ago.