You are here: Home › News › Physicists get a glimpse of fault-tolerant qubits
By Will Parker on April 22, 2010 in News 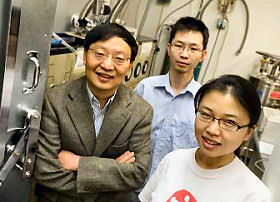 Rice University and Princeton University physicists have uncovered a bizarre state of matter which acts like a particle that possesses what the researchers call a “quantum registry,” making it immune to information loss from external quantum perturbations.

Writing in Physical Review Letters, the researchers explain that ultracold mixes of electrons caught in magnetic traps – dubbed “5/2 quantum Hall liquids” in reference to the unusual quantum properties that describe their makeup – could have the necessary properties for constructing fault-tolerant quantum computers.

“The big goal, the whole driving force, besides deep academic curiosity, is to build a quantum computer out of this,” said the study’s lead author Rui-Rui Du (left in picture), professor of physics at Rice. “The key for that is whether these 5/2 liquids have ‘topological’ properties that would render them immune to the sorts of quantum perturbations that could cause information degradation in a quantum computer.” Du said the team’s results indicate the 5/2 liquids have the desired properties, representing a “non-Abelian” state of matter.

Non-Abelian is a mathematical term for a system with “noncommutative” properties. In math, commutative operations, like addition, are those that have the same outcome regardless of the order in which they are carried out. So, one plus two equals three, just as two plus one equals three. In daily life, commutative and noncommutative tasks are commonplace. For example, when doing the laundry, it doesn’t matter if the detergent is added before the water or the water before the detergent, but it does matter if the clothes are washed before they’re placed in the dryer.

“It will take a while to fully understand the complete implications of our results, but it is clear that we have nailed down the evidence for ‘spin polarization,’ which is one of the two necessary conditions that must be proved to show that the 5/2 liquids are non-Abelian,” Du explained. “Other research teams have been tackling the second condition, the one-quarter charge, in previous experiments.”

The importance of the noncommutative quantum properties is best understood within the context of fault-tolerant quantum computers. Quantum computers use “quantum bits,” or qubits. Unlike binary ones and zeros, the qubits can be thought of as little arrows that represent the position of a bit of quantum matter. The arrow might represent a one if it points straight up or a zero if it points straight down, but it could also represent any number in between. In physics parlance, these arrows are called quantum “states.” And for certain complex calculations, being able to represent information in many different states would present a great advantage over binary computing.

The upshot of the 5/2 liquids being non-Abelian is that they have a sort of “quantum registry,” where information doesn’t change due to external quantum perturbations. “In a way, they have internal memory of their previous state,” Du said.

The conditions needed to create the 5/2 liquids are nothing short of extreme. At Rice, Tauno Knuuttila, a former postdoctoral research scientist in Du’s group, spent several years building the “demagnetization refrigerator” needed to cool 5-millimeter squares of ultrapure semiconductors to within one-10,000th of a degree of absolute zero. It took a week for Knuuttila to simply cool the nearly one-ton instrument to the necessary temperature for the Rice experiments. The gallium arsenide semiconductors used in the tests are the most pure on the planet. They were created by Loren Pfieiffer, Du’s longtime collaborator at Princeton and Bell Labs.