Eating disorders lurking in most women 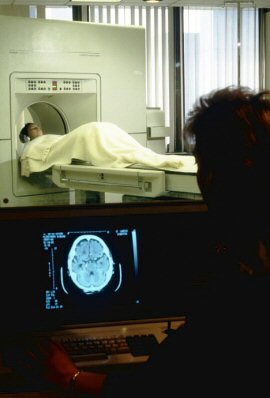 When women with eating disorders viewed an image of an overweight person, MRI scans revealed their brains "lighting up" in ways that suggested extreme unhappiness and self-loathing. But the researchers, from Brigham Young University (BYU), were astonished to observe the same responses from women with no history of eating disorders and no apparent body image issues.

"These women have no history of eating disorders and project an attitude that they don't care about body image," said Mark Allen, a BYU neuroscientist. "Yet under the surface is an anxiety about getting fat and the centrality of body image to self."

According to Allen's study, appearing in the journal Personality and Individual Differences, men did not show any signs of similar self-reflection when viewing the images.

The findings came about during a project to improve the treatment of eating disorders by tracking patient progress with brain imaging. Allen wanted to establish a baseline of "healthy" MRI responses so he recruited a control group of women who scored in the healthy range on eating disorder diagnostic tests. But, to his surprise, the control group exhibited what Allen calls "sub-clinical" issues with body image.

Allen and co-researcher Diane Spangler then ran the experiments with a group of men for comparison but did not find any kind of similarity in the responses. "Although these [healthy] women's brain activity doesn't look like full-blown eating disorders, they are much closer to it than men are," Allen said.

Spangler says women are bombarded with messages that perpetuate the thin ideal, and the barrage changes how they view themselves. "Many women learn that bodily appearance and thinness constitute what is important about them, and their brain responding reflects that," Spangler said. "I think it is an unfortunate and false idea to learn about oneself and does put one at greater risk for eating and mood disorders."