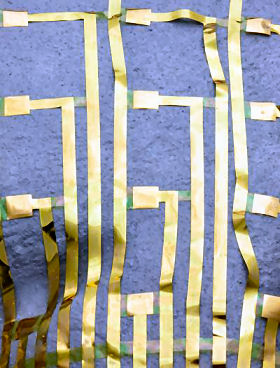 Scientists have developed a brain implant that essentially melts into place, snugly fitting to the brain's surface. According to the development team, the ultrathin flexible implants, made partly from silk, can record brain activity more faithfully than thicker implants embedded with similar electronics. Reported in Nature Materials, the technology could pave the way for devices to monitor and control neurological disorders and to transmit signals from the brain past damaged parts of the spinal cord.

The focus of the new study was to make ultrathin arrays that conform to the complex shape of the brain, and limit the amount of tissue damage and inflammation, explained Brian Litt, study author and an associate professor of neurology at the University of Pennsylvania. The silk-based implants developed by Litt's team can hug the brain like shrink wrap, collapsing into its grooves and stretching over its rounded surfaces.

The new implants contain metal electrodes that are 500 microns thick, or about five times the thickness of a human hair. The absence of sharp electrodes and rigid surfaces should improve safety, with less damage to brain tissue, explained Litt. He added that the implants' ability to mold to the brain's surface should provide better stability and by spreading across the brain, the implants have the potential to capture the activity of large networks of brain cells.

The arrays consisted of 30 electrodes in a 5x6 pattern on an ultrathin layer of polyimide - with or without a silk base. These experiments led to the development of an array with a mesh base of polyimide and silk that dissolves once it makes contact with the brain - so that the array ends up tightly hugging the brain.

Next, the team tested the ability of these implants to record the animals' brain activity. By recording signals from the brain's visual center in response to visual stimulation, they found that the ultrathin polyimide-silk arrays captured more robust signals compared to thicker implants.

In the future, the researchers hope to design implants that are more densely packed with electrodes to achieve higher resolution recordings. "It may also be possible to compress the silk-based implants and deliver them to the brain, through a catheter, in forms that are instrumented with a range of high performance, active electronic components," said co-researcher John Rogers, a professor of materials science and engineering at the University of Illinois, who devised the flexible electronics used in the implants.