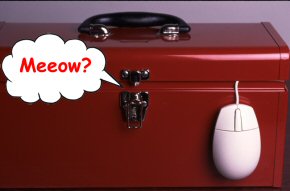 Memristive devices, or memristors as they are commonly known, combine the electrical properties of a memory element and a resistor. They are characterized by one or more state variables that define the resistance of the switch depending upon its voltage history. First hypothesized 40 years ago, the recent demonstration of mass produced memristors performing stateful logic operations may herald an exciting new chapter in artificial intelligence and artificial consciousness research.

University of Michigan computer engineer Wei Lu has taken a first step toward utilizing this new technology by demonstrating a memristor connecting conventional circuits and supporting a process that is the basis for memory and learning in biological systems. Lu hopes to build on this initial success by eventually creating an artificial cat brain.

"We are building a computer in the same way that nature builds a brain," Lu told the journal Nano Letters. "The idea is to use a completely different paradigm compared to conventional computers. The cat brain sets a realistic goal because it is much simpler than a human brain but still extremely difficult to replicate in complexity and efficiency."

In a mammal's brain, neurons are connected to each other by synapses, which act as reconfigurable switches that can form pathways linking thousands of neurons. Most importantly, synapses remember these pathways based on the strength and timing of electrical signals generated by the neurons.

"In a conventional computer, logic and memory functions are located at different parts of the circuit and each computing unit is only connected to a handful of neighbors in the circuit. As a result, conventional computers execute code in a linear fashion, line by line," Lu explained. "They are excellent at performing relatively simple tasks with limited variables but a brain can perform many operations simultaneously, or in parallel. That's how we can recognize a face in an instant, but even a supercomputer would take much, much longer and consume much more energy in doing so."

So far, Lu has connected two electronic circuits with one memristor. He has demonstrated that this system is capable of a memory and learning process called "spike timing dependent plasticity." This type of plasticity refers to the ability of connections between neurons to become stronger based on when they are stimulated in relation to each other. Spike timing dependent plasticity is thought to be the basis for memory and learning in mammalian brains.

"We show that we can use voltage timing to gradually increase or decrease the electrical conductance in this memristor-based system. In our brains, similar changes in synapse conductance essentially give rise to long term memory," Lu said. The next step is to build a larger system, he added, saying that his goal is to achieve the sophistication of a supercomputer in a machine the size of a two-liter beverage container. Lu's work is funded by the Defense Advanced Research Projects Agency.