You are here: Home › News › Black hole effect created with nanotube
By Will Parker on April 7, 2010 in News 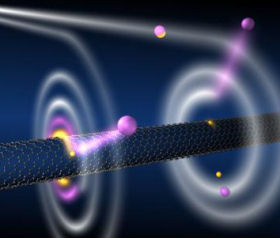 Harvard physicists have found that a high-voltage nanotube can cause cold atoms to spiral inward under dramatic acceleration before disintegrating violently – an atomic scale destructive force that is eerily similar to the inexorable attraction black holes exert on matter at cosmic scales.

“Importantly for scientists, this is the first merging of cold-atom and nanoscale science, and it opens the door to a new generation of cold atom experiments and nanoscale devices,” researcher Lene Vestergaard Hau told the journal Physical Review Letters.

Hau and co-authors Anne Goodsell, Trygve Ristroph, and Jene A. Golovchenko laser-cooled clouds of one million rubidium atoms to just a fraction of a degree above absolute zero. The physicists then launched this millimeter-long atomic cloud towards a suspended carbon nanotube, located some two centimeters away and charged to hundreds of volts.

The vast majority of the atoms passed right by the wire, but those that came within a micron of it were inescapably attracted, reaching incredibly high speeds as they spiraled in toward the nanotube. “From a start at about 5 meters per second, the cold atoms reach speeds of roughly 1,200 meters per second [2,700 miles per hour] as they circle the nanotube,” said Goodsell. “As part of this tremendous acceleration, the temperature corresponding to the atoms’ kinetic energy increases from 0.1 degrees Kelvin to thousands of degrees Kelvin in less than a microsecond.”

The speeding atom then separates into an electron and an ion rotating in parallel around the nanowire, completing each orbit in just a few trillionths of a second. The electron eventually gets sucked into the nanotube via quantum tunneling, causing its companion ion to shoot away – repelled by the strong charge of the 300-volt nanotube – at a speed of roughly 26 kilometers per second (59,000 miles per hour).

“Cold-atom and nanoscale science have each provided exciting new systems for study and applications,” says Golovchenko, Rumford Professor of Physics at Harvard. “This is the first experimental realization of a combined cold atom-nanostructure system. Our system demonstrates sensitive probing of atom, electron, and ion dynamics at the nanoscale.”