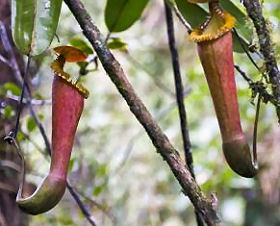 Reporting their findings in the journal Environmental Science & Technology, British scientists say they have evidence that the consumption of insects contaminated with a toxic metal may be a factor in the mysterious global decline of carnivorous plants.

The study authors, Bournemouth University scientists Iain Green and Christopher Moody, note that many species of carnivorous plants are already endangered through habitat loss and illegal poaching. Their new findings show that exposure to insect prey contaminated with certain metals can harm plants by interfering with water and nutrient uptake.

In the past, little has been known about how such metals actually affect carnivorous plants. The two metals of particular concern are copper, a nutrient important for plant health, and cadmium, a toxic metal found in fertilizers, metal coatings and other products. Both can accumulate in the environment through improper waste disposal and habitat disruption.

Green and Moody fed contaminated house fly maggots to a group of endangered white-topped pitcher plants (Sarracenia leucophylla) and found that the cadmium accumulated in the plants' stems in a way that can be toxic and disrupt growth. Copper intake, however, did not appear to cause any toxic effects. The findings emphasize the importance of limiting carnivorous plants' exposure to cadmium, say the authors.

Related:
Ecological Farming May Cause More Heavy Metals In The Soil
Salmon From Fish Farms A Tad Toxic
Biodiversity - Key To Ecosystem Health