E8 "theory of everything" looking rocky 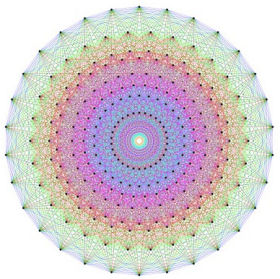 The exceptionally simple theory of everything - known as E8 - proposed by a surfing physicist in 2007, does not hold water, says rock-climbing Emory mathematician Skip Garibaldi. Garibaldi did the math to disprove the theory in conjunction with physicist Jacques Distler, of the University of Texas, and their work appears in Communications in Mathematical Physics.

Back in 2007, physicist Garrett Lisi published a paper entitled "An Exceptionally Simple Theory of Everything." Lisi spent much of his time surfing in Hawaii, and although his paper on E8 was not peer-reviewed, the Daily Telegraph newspaper touted it under attention-grabbing headlines like "Surfer dude stuns physicists with theory of everything."

Lisi's paper centered on the elegant mathematical structure known as E8, which also makes its presence felt in string theory. First identified in 1887, E8 has 248 dimensions and cannot be seen - or even drawn - in its complete form. The enigmatic E8 is the largest and most complicated of the five exceptional Lie groups, and contains four subgroups that are related to the four fundamental forces of nature: the electromagnetic force; the strong force (which binds quarks); the weak force (which controls radioactive decay); and the gravitational force.

Lisi's paper proposed that E8 is the unifying force for all the forces of the universe. "That would be great if it were true, because I love E8," Garibaldi said. "But the problem is, it doesn't work as he described it in his paper."

Using linear algebra and proving theorems to translate the physics into math, Garibaldi and Distler not only showed that the formulas proposed in Lisi's paper do not work, they also demonstrated the flaws in a whole class of related theories.

"You can think of E8 as a room, and the four subgroups related to the four fundamental forces of nature as furniture, let's say chairs," Garibaldi explained. "It's pretty easy to see that the room is big enough that you can put all four of the chairs inside it. The problem with 'the theory of everything' is that the way it arranges the chairs in the room makes them non-functional." He gives the example of one chair inverted and stacked atop another chair. "I'm glad that I will now be able to point to a peer-reviewed scientific article that clearly rebuts this theory," he concluded.