You are here: Home › News › Opium poppy gives up its genetic secrets
By Will Parker on March 15, 2010 in News 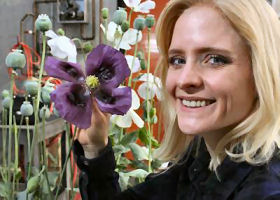 Codeine, usually synthesized from the morphine found in the opium poppy, is one of the world’s most commonly prescribed painkillers. But despite its widespread use, poppies are only grown as a commercial crop in a handful of countries, thus making many nations dependent on opiate imports.

Now, however, researchers at the University of Calgary have discovered the unique genes that allow the opium poppy to produce painkillers such as codeine and morphine. This, say the research team, will open the door to alternate methods of producing painkillers, possibly even by manufacturing them in a lab using micro-organisms.

“The enzymes encoded by these two genes have eluded plant biochemists for a half-century,” says researcher Peter Facchini. “In finding not only the enzymes but also the genes, we’ve made a major step forward. It’s equivalent in finding a gene involved in cancer or other genetic disorders.”

Researcher Jillian Hagel (pictured) did the hard yards of finding these key genes as part of her Ph.D. research. She succeeded by using leading-edge genomics techniques that helped her sort through up to 23,000 different genes and ultimately find a gene called codeine O-dementhylase (CODM) that produces the plant enzyme converting codeine into morphine.

The research, appearing in Nature Chemical Biology, will allow scientists to synthesize codeine and other opiate drugs more efficiently and economically in controlled bioprocessing facilities. “Our discovery now makes it possible to use microorganisms to produce opiate drugs and other important pharmaceuticals,” said Facchini. Hagel added that one of the next steps for the research team is using the codeine gene to produce pharmaceuticals in yeast or bacteria.