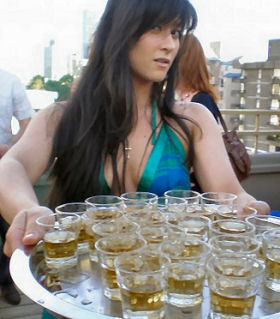 Not swallowing the worm at the bottom of a bottle of mescal doesn't mean you'll avoid worminess, say scientists at the University of Guelph who have discovered that the mescal, far from destroying the DNA of the agave butterfly caterpillar, actually leeches it out of the worm and preserves it.

Reporting their findings in the journal BioTechniques, the researchers explain how they set out to test a hypothesis that DNA from a preserved specimen can leak into its preservative liquid. As part of their study, they tested a sample of liquid from a bottle of mescal. The liquor was found to contain DNA, which they amplified and sequenced to obtain a DNA barcode. Querying the database at Guelph confirmed that the mescal liquid contained DNA related to the agave's family.

"This is a surprising result," said researcher Mehrdad Hajibabaei, noting that mescal contains only 40 per cent ethanol and potentially many impurities that can degrade DNA. "Showing that the DNA of a preserved specimen can be obtained from the preservative liquid introduces a range of important possibilities," he said. "We can develop inexpensive, high-throughput, field-friendly and non-invasive genetic analysis protocols for situations where the original tissue cannot be touched or when there is simply no sample left for analysis."

Related:
Cost of genotyping plunges thanks to Sudoku logic
Spit-Swap Forces Changes To DNA Testing
Metagenomics: The More The Merrier