You are here: Home › News › White paint touted as climate remedy
By Will Parker on February 2, 2010 in News 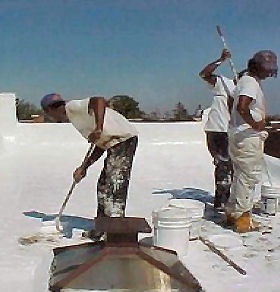 Painting the roofs of buildings white has the potential to significantly cool cities, say researchers from the National Center for Atmospheric Research (NCAR), who have calculated that New York City would cool by almost 2 degrees Fahrenheit in summer.

“Our research demonstrates that white roofs, at least in theory, can be an effective method for reducing urban heat,” says NCAR scientist Keith Oleson, the lead author of the study. “It remains to be seen if it’s actually feasible for cities to paint their roofs white, but the idea certainly warrants further investigation.”

The study, to be published in Geophysical Research Letters, explains that cities are particularly vulnerable to climate change thanks to asphalt roads, tar roofs, and other artificial surfaces that absorb heat from the sun and create an heat island effect that can raise temperatures by 2-5 degrees F.

For their study, the team used a newly developed computer model to simulate the amount of solar radiation that is absorbed or reflected by urban surfaces. The model indicates that, if every roof were entirely painted white, the urban heat island effect could be reduced by 33 percent. In larger metropolitan regions, the New York area for example, the researchers say the cooling effect could be around 2 degrees F.

The researchers emphasize that their work should be viewed as a hypothetical, as in the real world the cooling impact might be somewhat less because dust and weathering would cause the white paint to darken over time. Additionally, white roofs would have the effect of cooling temperatures within buildings. As a result, depending on the local climate, the amount of energy used for heating and air conditioning could change, which could affect both outside air temperatures and the consumption of fossil fuels such as oil and coal that are associated with global warming.

The research indicated that some cities would benefit more than others from white roofs, depending on such factors as:

The researchers plan to continue refining the model to provide more information for policymakers concerned about protecting urban populations from the risks associated with heat waves and other changes in climate. “It’s critical to understand how climate change will affect vulnerable urban areas, which are home to most of the world’s population,” said NCAR’s Gordon Bonan, a co-author of the study.

Related:
Global warming unstoppable?
Earth to get hotter sooner
Going Gaga Over Gaia Contrails And The Dark Side

Ozone hole closure not so cool
Facebook use associated with depression