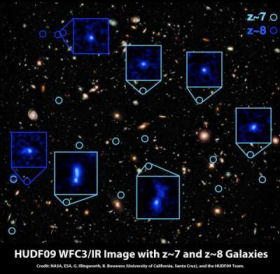 The Hubble Space Telescope has broken the distance limit for galaxies by uncovering a primordial population of ultra-blue galaxies whose light is reaching us now after 13 billion years - just 600 to 800 million years after the Big Bang.

Estimating the age of the newly found galaxies was made possible by combining Hubble's Ultra Deep Field (HUDF09) infrared survey data with optical observations from NASA's Spitzer Space Telescope. Five international teams of astronomers working together made the discovery and they are presenting their findings today at the 215th meeting of the American Astronomical Society in Washington DC.

The new galaxies will cause astronomers to revise their estimates of the earliest galactic formations. "The masses are just 1 percent of those of the Milky Way," explains team member Ivo Labbé, of the Carnegie Observatories. "To our surprise, the results show that these galaxies existed at 700 million years after the Big Bang and must have started forming stars hundreds of millions of years earlier, pushing back the time of the earliest star formation in the universe."

Team member Rychard Bouwens, of the University of California, Santa Cruz, says that; "the faintest galaxies are now showing signs of linkage to the origin of the first stars. They are so blue that they must be extremely deficient in heavy elements, thus representing a population that has nearly primordial characteristics."

The HUDF09 observations are deep enough at near-infrared wavelengths to reveal galaxies at redshifts from z=7 to beyond redshift z=8 (the redshift value "z" is a measure of the stretching of the wavelength or "reddening" of starlight due to the expansion of space). The clear detection of galaxies between z=7 and z=8.5 corresponds to times-in-the-past of approximately 12.9 billion years to 13.1 billion years ago.

Spectroscopy is needed to provide definitive redshift values, but the newly detected objects are too faint for spectroscopic observations using current telescopes. "We are reaching the limit of what we can do with Hubble," lamented Labbé. "To witness the emergence of the first galaxies requires bigger facilities such as the future James Webb Space Telescope and large telescopes on the ground, such as the planned Giant Magellan Telescope."

The relatively low mass of the new galaxies raises the intriguing question of whether they could put out enough radiation for "reionization," a phenomenon in which light strips off electrons from the surrounding hydrogen gas. A reonization event occurred between about 400 million and 900 million years after the Big Bang and ended the era referred to as the "dark ages," when the universe, mostly made of hydrogen atoms, was neutral and opaque, and without stars or galaxies.

Astronomers still don't know which sources of light caused reionization to happen. Several teams are finding that the number of detected galaxies per unit of volume of space drops off smoothly towards earlier times, and that there may be too few of them to ionize the universe. On the other hand, the early galaxies were possibly extraordinarily efficient at emitting ionizing radiation, or perhaps other more exotic phenomena may need to be invoked.